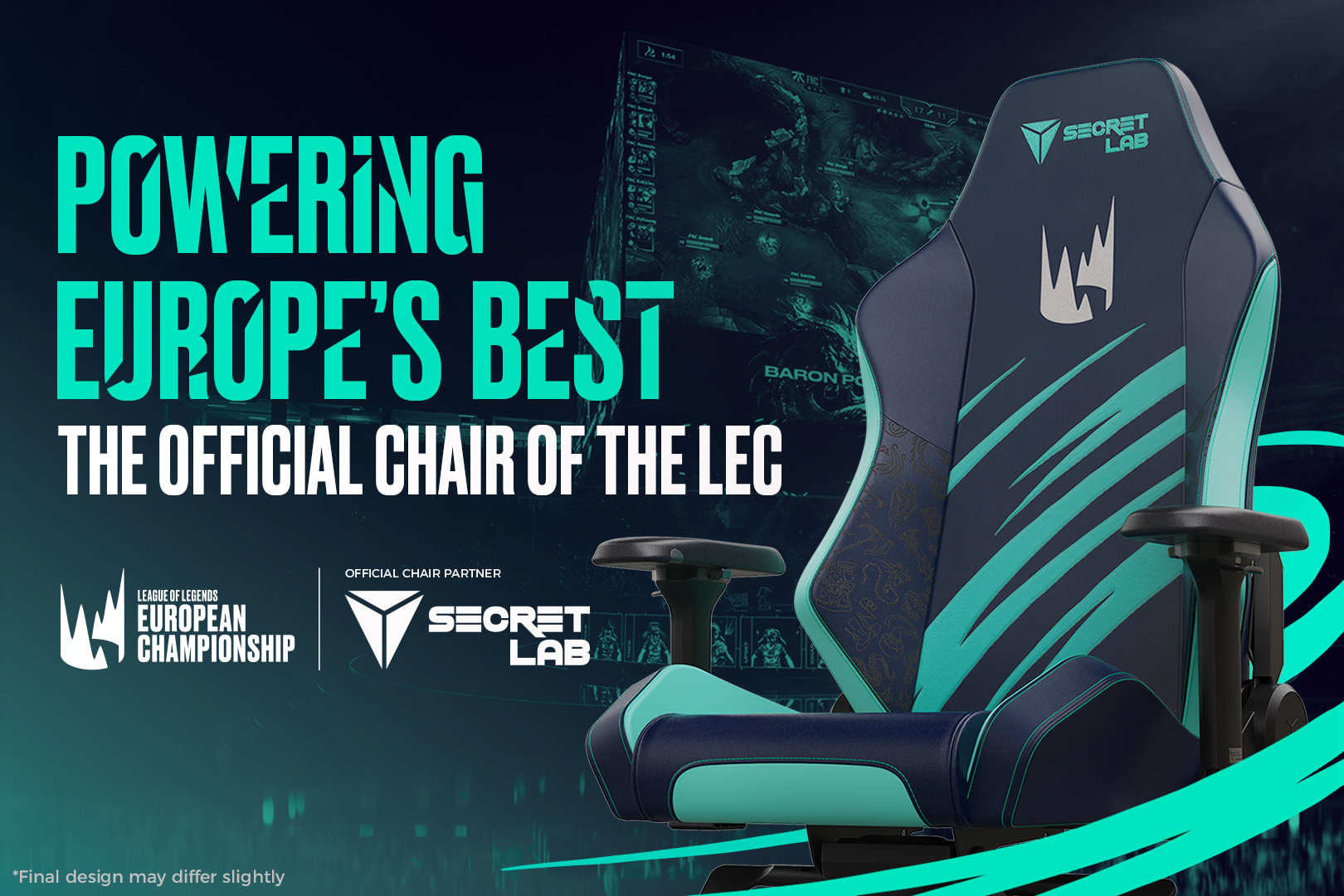 The latest tie-up cements Secretlab’s position as Riot Games’ top pick for its biggest tournaments. Last year, Secretlab inked a multi-year, global partnership with Riot Games, which saw it outfit the League of Legends Championship Series (LCS) and its three premier global events — the Mid-Season Invitational, the All-Star Event, and the World Championship — with its industry-leading seats.

League of Legends is the most-played and most-viewed esport title in the world — the 2019 World Championship set a new record with 44 million peak concurrent viewers from all across the world. The LEC itself has also enjoyed healthy growth, with the 2020 Spring Split peaking at 807,033 viewers, a 76% increase compared to the previous 2020 Spring record.

The LEC overhauled its brand last year, a visual redesign that included a fresh new logo, a revamped LEC Studio in Berlin with state-of-the-art infrastructure, and a major focus on boosting the overall production quality. With an eye toward continual improvements, Riot Games chose Secretlab as the official chair partner of the LEC to outfit its teams with the best possible equipment, the obvious choice given the company’s proven track record in top-tier League of Legends tournaments.

In addition, Secretlab and Riot Games will release the world’s first official LEC chair with the Secretlab LEC Edition, which reflects the league’s new visual branding and encapsulates a unique European identity distinct from the League of Legends Championship Series (LCS).

The Secretlab LEC Edition comes with all the upgrades of the Secretlab Classics* and is engineered for all-day comfort and lasting support. Fans can look forward to upgrading their seating experience with the same chair trusted by the LEC and teams like Spring Split champion G2 Esports.

The chair features the brand new LEC logo, a stunning two-piece design built around the theme of “Unleash Together” and inspired by the explosive energy that characterizes top-level League of Legends gameplay. It is also a celebration of the clash of League of Legends’ various champions and the two teams battling in the Summoner’s Rift. The two halves come together to form a crown, signifying the eventual victor, while the use of vibrant, contrasting colors further drive home the epic clashes playing out on the LEC stage.

The Secretlab OMEGA 2020 and Secretlab TITAN 2020 LEC Edition will be available to buy later this year. For now, fans can head to https://secretlab.co/lolesports to register their interest and be the first to know when they can place their order.

“Secretlab has consistently been picked as the chair of choice of the biggest, international esports tournaments, where the world’s best talent is on display and the stakes are the highest. League of Legends is the world’s most popular esport, both in terms of player and viewership numbers, and we are incredibly excited to cement our partnership with Riot Games and further our goal to equip the world’s elite players with the support they need to succeed. Secretlab remains dedicated to creating the ultimate seating experience for gamers, and our commitment to comfort and performance is what enables us to meet the exacting standards set by pro players.”

“Europe’s top League of Legends players require the absolute best equipment and support. Secretlab’s award-winning seats are optimized for maximum performance and comfort, and they already support our players in the LCS and premier, global tournaments, including Worlds. As the LEC rebrands and looks to create even more engaging experiences for its fans, Secretlab was the obvious choice when it came to outfitting these elite athletes with the comfort they need to execute their best plays.”

Secretlab was established in 2014 to create the pinnacle of gaming seats—each extensively designed and engineered with only materials of the highest grade to ensure absolute comfort and unparalleled support. Today, Secretlab is the global choice of gaming seats for the world’s most premier gaming tournaments, top esports professionals and over 500,000 satisfied users from more than 60 countries worldwide, alongside rave reviews from international media publications. And we’re only getting started.

About the League of Legends European Championship

The League of Legends European Championship (LEC) launched in January 2019 and became the most viewed esport league in Europe. Comprising ten teams that compete on a weekly basis in two 12 week long seasons, the LEC culminates each season in a live Finals in arenas across Europe, including Rotterdam and Athens. The LEC has signed mainstream sponsors including KIA, Pringles, Beko, Kit Kat, Logitech, Alienware, and Warner Music. As of Spring 2020 the LEC’s Average Minute Audience, which is fans watching at the same time, is consistently over 200,000 across seven languages.